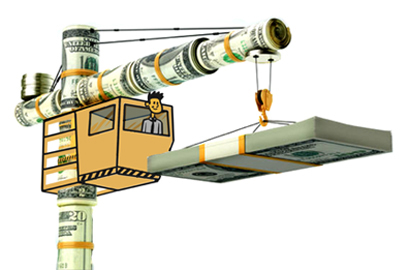 To save money, many companies look to acquire used and/or preowned equipment instead of new. And as a leading lender in regards to financing used equipment, we thought it would be helpful to educate businesses on the differences the preowned market brings. This is because there are several key components to look for.
The first is actually finding a lender willing to work with you. This is an important point, because many lenders today have tightened their lending criteria, and have dropped preowned equipment financing altogether. Why have they dropped it? It's simply because all else being equal, used equipment lending is riskier than new equipment (the reasons why will become clear during this article). Thus, step one is to find the right lender. Once you find the right lender, the next aspect to understand is because of the increased risk, you will almost certainly pay a higher rate than if you were financing a new piece of equipment. This rate will depend on several criteria, such as:

"The age and condition of the equipment."

Obviously, more recent equipment in good shape is seen as a safer risk. Think about buying a car – the
three-year-old "little old lady" sedan is likely in much better shape, and will last longer, than the nine year old teenage burnout special.

"The purpose of the equipment."

"Why is the equipment available?"

Is it because it's great equipment but the selling company is going out of business, or is it because it's being replaced by much better equipment? The latter could mean a higher rate, as technical obsolescence could be a factor (more on this later).

The preceding affects not only the rate, but in many cases, the term as well. Think about it logically – nobody wants to finance a piece of equipment for five years when the expected useful life is four.

Ok, you have found a lender, and even rate and terms that satisfy you. What else should you look out for when you are buying used equipment? Well, how about a warrantee or service agreement?

This is actually very important, and might even be a condition some lenders will insist on (we don't, but some do). Why is this? Because the simple truth is used equipment breaks more often than new equipment (it's not hard to understand why). So when a company buys a piece of used equipment, and it breaks down two weeks later, they (understandably) get angry. Their first step is to go to the seller. But without any warranty or maintenance agreement, the seller says "sorry, not our problem". So the buyer does the next best thing (in their mind), saying "fine, but we're not paying for this". However, the seller doesn't care – it's the innocent equipment financing company that's on the hook for the money – all that's accomplished by not paying is the buyer's credit is damaged.

One final key component which often goes overlooked in buying a piece of used equipment is technical obsolescence. This can be a tricky part of the equation, and may force you to try your hand at forecasting the future. Here's what I mean:

I'm going to guess that seven to ten years ago, a small-but-growing print shop decided to take a plunge and expand, buying several used offset presses. They found a lender, and got the equipment they needed. And you know, the first year was great. They printed all kinds of brochures and business cards and such for local businesses. Then one day, the owner was watching TV, and saw a commercial for Vista Print… and that was that.

Technical obsolescence happens all the time. Sometimes, it can be swift and crippling (like my previous example. Or to give another situation, think about a video rental store that opened in 1997…). This is usually true for industries which are seeing a digital competitor, even if it's small at the time (Netflix started in 1997, but right away, that was the beginning of the end for video rentals).

But sometimes, technical obsolescence can be slow, and not so-crippling (think about a machine that makes widgets – one that requires a human operator vs. a computer controlled one. The human operated one might still be very useful for years, and even perhaps decades, to come.) Likewise, some pieces of equipment are also somewhat timeless – a 20 year old welding machine is still very useful. You may not need (or find) a lender for something that old, but if you need a welding machine, you probably don't need to be afraid of it being obsolete anytime soon.

I hope the preceding can give you a little more insight if you are considering financing used equipment. If you have any questions, simply reach out to us here at Crest Capital, and we'll do our best to help you.

About the Author
George Messic - National Accounts, Crest Capital. George has a long record of helping business owners successfully grow their businesses with economical equipment financing and leasing. With more than 25 years of applying his expertise and market knowledge, combined with uncompromising integrity, George has become the "Go to" equipment finance guy for companies large and small all across the United States.