The story of 2022 so far is inflation and interest rates.

Inflation is way up, and in response, the Federal Reserve has been raising interest rates all year. We’ve seen four rate increases so far in 2022, including two consecutive .75 basis point increases (the largest since the 70’s). 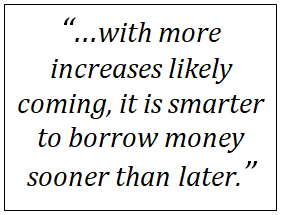 If you read what most respected economists think, we’re likely looking at another .50 -.75 increase later this year and several smaller increases until inflation starts to come down. So most people feel pretty confident in thinking they will keep rising all the way through 2023.

So what does that mean for small and mid-sized companies? It means a lot of different things, depending on how you look at it.

For some companies, it will mean doom and gloom. They will 100% turtle up, and not spend a dime for… years, I suppose.

But smart companies will see this for what it is: the inevitable rate swings that have been a part of business for decades.

These companies also know something else: with more increases likely coming, it is wiser to borrow money sooner than later. So let’s talk more about that.

Yes, rates have gone up. But for the previous few years before these increases, we had the lowest rates in history.

See this graph below from FRED (fred.stlouisfed.org) for the Federal Funds Rate (which is what banks generally charge each other and is what other lending rates use as a baseline). It doesn’t include the last increase, which didn’t make the chart, but even with that, interest rates are still at historic lows.

You can also see something else – except for the early 80’s and once in early 2020 (pandemic panic anyone?), rates generally rise and fall gradually, over months and even years.

So knowing this, and knowing that these rates are going to continue to rise to combat inflation, the following statement is very likely to be accurate for the next year: The rate you see right now (whenever “right now” is) is the lowest one you’ll see for quite some time.

No, You Didn’t Lose

This thought came about in our office after the first .75 increase. There was a client who was borrowing to finance heavy equipment. They were debating between two different models and price points, and in the time they were discussing this, they completely forgot about the looming rate increase and “missed” it.

Their mood was quite somber for a few days, and they even contemplated not buying anything because in their words “they lost” – had they been just a few days quicker, they would have had a lower rate. To quote the owner: “it feels like we’re throwing money away”.

But were they really? Yes, they missed a rate increase. But they missed one – there were still likely many more to come.So if they got in before the next one, isn’t that a “win”? Context definitely matters here.

Second, they stillneeded the equipment. It was going to earn revenue.

Third, even after the increase, the rate our good-credit customer could finance equipment at was still quite low. Again, refer to the Federal Funds Rate chart above.

They ended up going through with the deal, and since there was another .75 increase afterwards, with more very likely on the way, they now feel like they indeed “won”. And their equipment is in the field every day, earning revenue too - win/win.

We would all do well to pay attention to the historical rise and fall of rates. We’re on an upward swing right now, with the not-yet-reached peak likely followed by a period where they neither rise and fall. So if you had any aspirations of acquiring equipment in the next 12 months, you are probably better off getting it now as opposed to later. Because there’s still a lot of winning to be had.

Back to Media Center
Restore Sectionl79 Limits Earlier This Year.