The High Cost of a Low Equipment Financing Rate 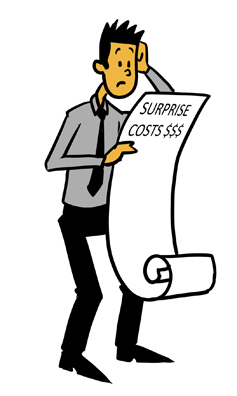 Recently, I was looking at home security systems. Not that I really feel I need one, but two of my neighbors just got them. So in the interest of not being the only house on the block without one, I started looking around.

One security company had a low monthly monitoring rate, and a "free" system. But the "free" system was woefully inadequate (probably about as effective as the car alarm that everyone ignores), and the low price disappeared once you built an acceptable system.

Again, easy-peasy to spot. Now if only the equipment financing industry was as simple.

Here's the reason – in equipment financing, "the rate" is the only thing most people pay attention to. And on the surface, that's not strange. After all, if you take two loans, and assume the down payment and term length are the same on each, then the lowest rate is going to be the better deal in a straight "which one is less money" sense.

But it's the "other stuff" – the stuff buried in the fine print – that kills you. Let's take a typical low rate bank loan as an example.

The bank loan will have a great rate. But here's what they will also have:
• A big bad Blanket Lien on all of your company's stuff will definitely be in the fine print. Even assets not related to the loan will be under this blanket lien. Want to sell an unrelated piece of equipment next year? Bzzzt – nope, you can't without the bank's permission. And they aren't all that keen on granting permission.

• This blanket lien will also cover NEW assets obtained after the loan. This could actually hurt your chances of acquiring further equipment, even from another lender. This is because most lenders will want to use the equipment itself as collateral (this is perfectly normal and reasonable). But a lender may balk if they must be second in line.

• You will need to keep a minimum balance on account with the bank. Sometimes as much as 80% of the loan. Errr, so if you need to keep 80% of loan in the bank that gave you the loan, just who's money are you really borrowing?

• You'll need to requalify for the loan every year. So don't have a bad year, or even a slow quarter.

• You won't be able to get more money later if you need it. Something breaks and you need a replacement right away? The bank may not be able to help.

These covenants are no joke, and can literally paralyze a company's financial flexibility. I have seen it time and time again.

Now, what if I told you that if you can accept a point or two higher on the rate, you could eliminate all of the above? That's what you get with a reputable equipment financing company. You'll still get a competitive rate, but zero restrictive covenants. PLUS, you'll get a much easier "no forms" application process for most loans, faster approvals, and the equipment financing company will also happily add to your deal later if the need for more equipment comes up.

Basically, a good equipment financing company will loan you the money for equipment, and as long as you pay it back, we'll leave you (and your other assets) alone. Because that makes for good business all the way around.

Back to Media Center
Small Businesses Benefit from Regulation-Free Financing